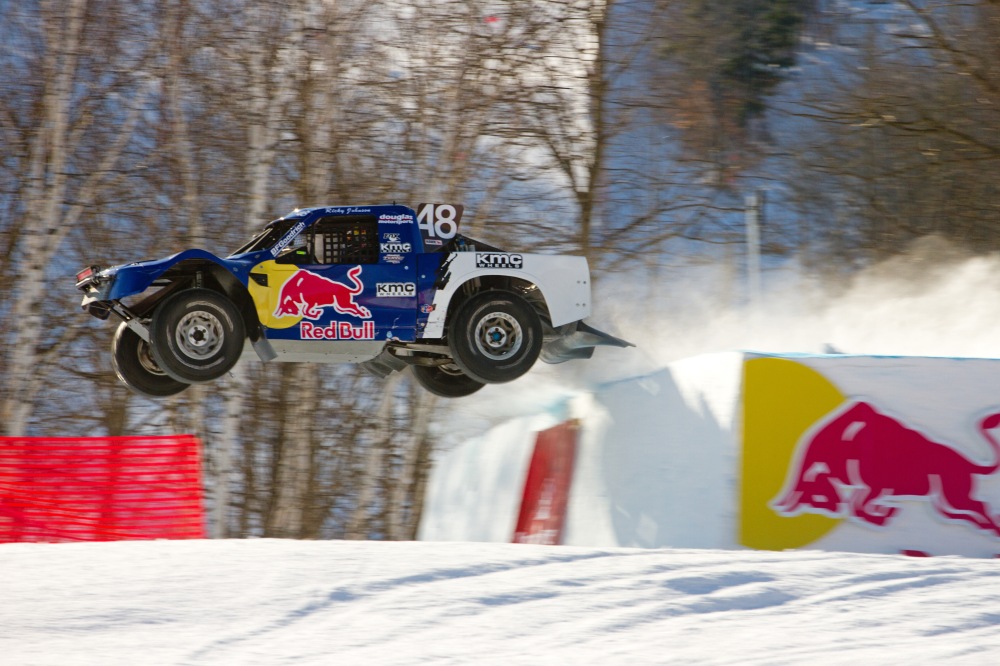 When Red Bull announced that Frozen Rush would be returning to Sunday River this January, the biggest question became the entry list: who would return from last year’s event, who wouldn’t return, and who would make their Pro 4 debut on snow in the second annual event. In the end, six drivers—defending winner Ricky Johnson, Bryce Menzies, Rob MacCachren, Scott Douglas, Carl Renezeder, and Todd Leduc—would get a second chance at taking home a trophy in the mountains of Maine.

Perhaps it’s no surprise, then, that the returning drivers have been dominant so far through two days of on-track action, leading off with Menzies winning all three Wednesday practice sessions and event sophomores claiming the first four spots in Thursday qualifying.

“We’ve got far more confidence than we’ve ever had on racing in the snow now,” said Douglas, who qualified fourth. “So instead of being a little timid, a little shy at first, and just having a good time and going out there, we’re all focused, we’re out there giving it our all.”

The 1.5-mile course hasn’t seen too many changes, with the main difference being a shorter lap for drivers in one of the two lanes that cuts down on two-lap aggregate times. Most of last year’s elements, from the 80-foot gap jump to the slalom, remain intact, giving returning drivers some additional confidence as they adjust to the specially designed BF Goodrich tires.

“With the snow, just out there driving by ourselves, I can speak for myself,” said MacCachren, who finished fourth last year and posted the third fastest qualifying time. “I’m still wondering every time I throw it into a corner, a high speed corner, is it going to stick? You think it’s not going to, but then it does, and then you wonder how good is it going to stick, or is it going to flip me over like it would in the dirt. To this point, I haven’t found that line—but I’m starting to teeter on it.

“One thing I think with the younger guys, that they have going a little bit against them, is that they need to learn that too. On the other hand, young guys usually have no fear—they’re just going to go! So they’re either going to crash it, or they’re going to do good.”

Of the five returnees who posted lap times on Thursday (Leduc missed qualifying with a mechanical issue), only Renezeder struggled. The nine-time short course champion chalked up the slower run to a new, experimental setup specially designed for the event.

“We’re also trying something new now—we’ve got a different driveline in that we haven’t used before,” he said. “We’re hoping it’ll be better for the snow (but) we haven’t had enough time to learn what it’s doing. Two laps here, two laps there, and we’re starting to figure it out a little bit, I think.”

Johnson, the pioneer who first took a Pro 4 to the snow two years ago, backed up last year’s victory by taking the top seed in qualifying despite driving a different truck in the event than he had last year. As the driver with the most to do with the weekend’s event, he’s well aware that the target is placed firmly on his back.

“I’ve driven in snow two more times, less than 20 minutes, more than anyone else, (but) I guess that makes me the master of it,” he said wryly. “(But) it’s an honor to race with this many champions and have a target on your back, just because as I look out I’ve got eight targets of my own. And I know that if I make the slightest mistake they’ll beat me.

“With me, every race there’s pressure. I go into it like it’s the Super Bowl, and I’m probably going to cry a little bit if I lose because it’s that way all the time. You have some of the greatest off-road racers in the world that have ever lived in this (event), and at this point, just to qualify on top of them, I’m pretty stoked.”